In order to combat this instinct to stop, because perfection was not achieved, we use drills to teach how to handle the situation.

This drill is designed to specifically teach the retrieval of a bobbled baseball.

1.   Hit a player a ground ball, don’t roll, and simulate it coming off the bat at various speeds.

2.   The player is to attempt to cleanly field the ball. If he fields it cleanly, he is to drop the ball at his feet, or 1-2’ out in front of him.

3.   He is to retrieve the ball and make the throw to first base. This method allows the teaching of “recovery” with the ability to still get the base runner out.

4.   For the first and second baseman you may have them bobble the ball twice in order to demonstrate their ability to still get the out because of their close proximity to the base.

After practicing a simple retrieval and throw play, it’s now time to add a bit of urgency to the play.

1.   Line the team up at home plate, minus the designated infielders, and have them rotate running to first base after you hit the ball to the fielder.

2.   The fielder should attempt to cleanly field the ball first, then bobble it out in front of himself, retrieve and throw to first base.

3.   The added element of the runner will induce the fielder to panic and rush his retrieval and throw.

4.   Stress mechanics, not speed, at this phase. Gripping the ball correctly the first time and making a strong accurate throw is the important lesson. 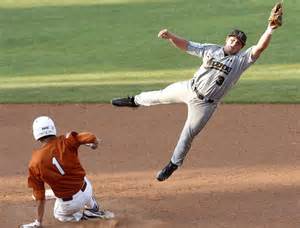 You have successfully taught players;

a.   Not to automatically give up on a bobbled ball

b.   Calm retrieval of the ball

Now let’s finish it off with “Good Judgment”

1.   Repeat the drill except move the runners 2-3’ closer to first base

2.   Hit a couple of balls to each infielder in order for him to analyze the difference of the runners being closer to first base.

3.   Then run the drill full speed adding the all-important “Human element.” Does the fielder retrieve and throw the ball … or hold it.

Should the fielder make an obvious wrong decision, the runner is within 2 feet of first when he starts the throw, stop and explain why the play was wrong. Other than that let the players decide.

Teach, but don’t confuse the issue, that holding a bobbled ball is better than making a wild throw allowing the runner an extra base or two.