Baseball Training-Scoring: Scoring From Third Base:

Let’s exam attempting to score from third base on a medium deep fly ball to left or center field, as it is the hardest base to advance from on this type of out, but it’s the most important as it involves 2/3 of fly balls hit to the outfield.

(1.) Teach your players how to obtain a reasonable leadoff, in foul territory, down the third base line. When the batter lifts a fly ball to left center field, and it’s questionable if the ball will drop or be caught, the player should automatically return to third base as fast as possible.

Why retreat? If the ball is not caught, you’ll most likely be able to jog home as throwing you out would be most difficult and require a perfect play, but if the ball is caught, you have put yourself in position to tag up and possibly advance after the catch.

If you must return to tag after the catch is made, you’ll never be able to score because of the additional time it took you to tag up. Bad decision. 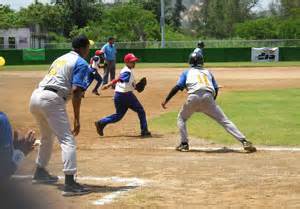 (2.) Upon returning to the base, the first thing you, as the base runner must do, is get into a position to clearly see the ball and the fielder, which may sound simple, but a wily third baseman may try to put himself between you and the outfielder blocking your view. You must adjusting your position should this occur.

(3.) This is when the third base coach becomes a valuable asset, as  he can move as needed in order to possibly gain a better line of sight on the ball than In all fairness, some coaches adhere to the theory that going half way on a the runner, which makes learning to immediately respond and take off on his command important.

Lead Off in Foul Territory 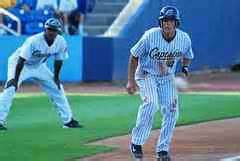 This drill is divided into three separate versions in order to teach and expose each player to the most common situations which exist during this scenario.

For this drill divide your team alternating players, having runners on third base, an outfielder in left and one in center field and a catcher.

Have a coach positioned at third base to verify the timing of the tag-up vs. catch on all parts of the drill.

(1.) Have your base runner simulate taking an actual lead off including their initial and secondary lead.

(2.) When the ball is hit to the outfield, have your runner immediately return to the base prepared to tag and advance.

(3.) This is solely the player’s decision if they feel the ball was hit deep enough to score or not, encourage aggressiveness, and the timing of the catch and their coming off the base.

II. Same set up as (I), except tell your runners not to watch the ball at all, but rather run on the third base coach’s voice command. The intention of this method is to decrease, and hopefully eliminate any hesitation to a verbal command by the coach.

III. This part of the drill may at first seem to contradict what you just taught in the previous session, but there are distinct differences, such as the runner will be looking at the ball in this portion, but the drill is intended to teach the player to rely on his own instinct. 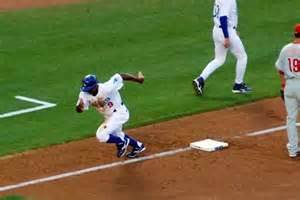 Inform the players the coach may be purposely giving incorrect directions of whether to run or not.

As the drill proceeds, make the calls much closer, forcing the player to immediately decide if you’re right or he‘s right.

Coaches are not always right, and what if the coach, for whatever reason, says nothing. You don’t want to lose the opportunity for an easy run because a bug flew into the coach’s mouth.

Baseball Training-Scoring back to Running the Bases