You will develop baseball training-instinct after a few years of practicing and playing the game. Unless you fit that category of experience and know this is a skill which cannot be taught, you are probably shaking your head and thinking “What’s he talking about now?”

Basically, Baseball Training–Instinct is a product of years of practice, playing, taught skills and knowledge of one’s own capabilities. Let’s look at a few examples of what we’re talking about.

What’s the big deal with this picture? 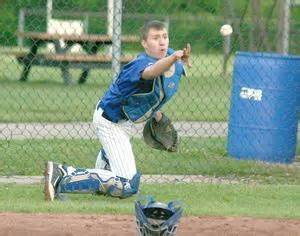 1.  He has thrown his mask/helmet away from the play;

2.  He has slid with his lead leg forward, back leg bent at knee in order to stay low and not over run the ball;

3.  He’s throwing the ball to another player, most likely the pitcher, in order to make a play;

These are all taught skills which come natural as experience increases. However, Instinct is involved here.

2.  He instinctively knew the ball had not traveled far. Had the ball been too far away a back hand flip to the other fielder would have never reached him.

As a coach you teach the proper skills and mechanics to make certain plays, but instinct will, at times, override proper method. 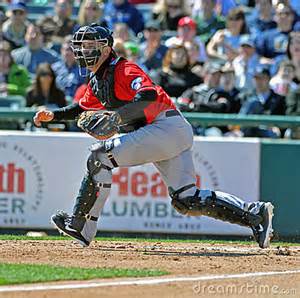 This catcher has utilized taught skills:

2.     He used a Soft-C block, leaning his body forward and exhaling upon impact; which has made the ball bounce out in front of the plate in clear sight;

3.     He has quickly regained fielding position.

Where’s the instinct? The catcher, because he is always observing everything, knows there is a runner of average speed on second base. Instead of concentrating on retrieving the ball, then look for the runner, the catcher is instinctively doing both at the same time.

He is watching the runner’s reactions, who has probably blown any chance of advancing to third because he hesitated, which dictates how quickly the catcher retrieves the ball and whether to come up throwing.

Had there been a jackrabbit and known good base runner on second base, the catcher would have only concentrated on retrieving the ball conceding there was no chance of throwing the runner out. Do not make a fruitless throw. Only bad things happen with such throws. 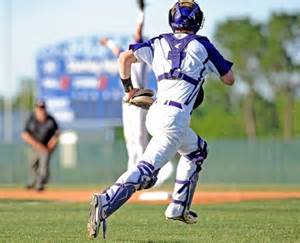 Sometimes instinct is nearly invisible and never makes the scorecard or acknowledgement in the newspapers. This catcher running is one such example.

1.     There is nobody on base and a ball has been hit to an infielder;

2.     The catcher is trailing the runner down the first base line in order to back up the play. This is a taught skill.

However, what you may not have noticed if we weren’t discussing instincts, is that the catcher is not jogging down the line at an angle, which is normal protocol, but is sprinting. Why?

2.     But, chances are he realized the infielder had either bobbled the ball or would have to make a difficult play which would require a quick off balance throw;

3.     Instinct tells him rushed throws from off balanced positions often result in catastrophes, so the catcher is prepared to get down the line ASAP in order to back up the throw. ***Notice the First Baseman leaping for the high throw? ***

So next time you do something during a game which helps you make a good or great play, and have no idea why you did what you did, smile to yourself. You are gaining baseball training–instinct.