Let’s look at some running drills, somewhat basic, that will teach you the general rules of base running.

Rule 1. Get on base. Practice hitting an imaginary infield ground ball by swinging a bat, then explode out of the batters’ box. Run a straight line, shortest distance between 2 points is a straight line, doesn’t matter if it is inside or outside the foul line.

Never slow down as you approach the base. First base is the only base you can legally run past and not be put out.

Once past the base slow down, stutter stepping or widen your feet, turn to your right and walk back to the base. Unless you hear your coach yelling or actually see an overthrow, never make a move toward second base or you can be tagged out. 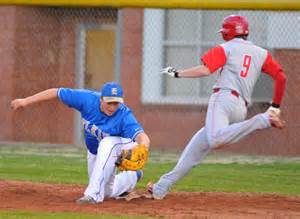 Rule 2. Always be thinking 2 (double). Again, swinging the bat imagine you have hit a sinking line drive into the outfield that you know will drop in for a hit. Explode out of the batters’ box and start running towards first base in a straight line, however @ 2/3 of the way down the baseline, swing slightly to your right towards the dugout in a backwards C motion.

Rule 3. Double Practice turning a base hit into a double. Practice the swing and hitting the inside of first base.

Rule 4. Triple Practice exactly as before except practice the swings and the proper hitting of the inside of both first and second base. 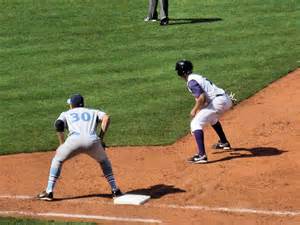 1.    When looking to the coach for the signal always be in contact with the base. Why? If you are concentrating on the coach, you are not watching the pitcher, which means a snap throw over to first could get you out before getting back to the base.

2.    Take your lead in small shuffle steps, never leaving the ground or crossing your feet in order to move forward. Why? If you are off the ground you can’t reverse direction until you make contact back to the ground. If your feet are crossed, you must finish the cross, then uncross then return to the base. All these unnecessary movements take time and time is one thing in short supply.

3.    A good secondary lead is very important. Remember to slightly stagger your feet, right rear foot slightly behind the front foot. This offers a streamlined cross over step when stealing a base. Once you determine the pitcher is throwing home, take 2 to 3 large shuffle strides towards second base. Never take your eye off the baseball. There are catchers who will throw behind the runner nailing you lazily returning to first base. 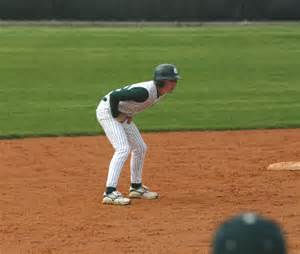 1.    Leading off second base is a 2 person job. You are responsible for keeping track of where the second baseman is located, while the third base coach watches the shortstop’s actions.

2.    We talked about running in straight lines. Lead offs of second base tend to bend those rules. As a runner you should lead off at least 2 steps behind the imaginary baseline as there is a two-fold reason for this.

a.    It gives you a running line in which you can hit third base on the inside portion and take a straight line to home plate.

b.    You can begin motion by creeping towards the pitcher in the set position, and lessen your distance to third base.

3.    Always be wary and keen on 2 issues. Make sure you don’t stray too far off second base on your secondary lead that you can’t get back safely, and watch for a pitcher/catcher’s routine. If you spot a flaw it could help you steal third base. Saying that… Never get caught trying to steal third base with no outs or 2 outs. 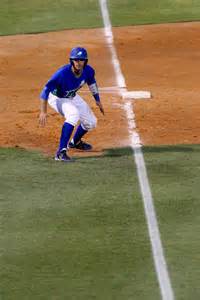 1.    Always lead off in Foul Territory and return to third in Fair territory, which makes a throw from the catcher harder to make.

2.    It’s always important to know the situation, but particularly important while at 3rd base. Are the infielders playing back or in? What place hitter is at bat? How many outs? These all play a crucial part in your decision making process.

3.    Freeze on line-drive hits. You never want to be doubled up on a line drive. If it is caught, scurry back to the base. If it gets through, jog home.

4.    Always go back to the base and tag up on any fly ball with less than 2 outs anticipating on tagging up and scoring after the catch.

Station a runner on each base, 1st, 2nd & 3rd, & home plate telling them to pretend they are the only runner/hitter on base.

Tell them a particular situation: such as 1 out. Then hit a fly ball to the right outfield and see how each runner reacts.

1.    The runners on 2nd and 3rd should automatically go back to their base to tag up.

2.    The runner on 1st should go half way and see what happens.

3.    The batter should run through first base.

You can run as many scenarios as you want changing the situation which could affect the runners’ decision. This is a great way of pre-programming runners’ instincts, which results in instant reaction time.

Baseball Training - Base Running to Running the Bases