The Baseball Swing of the bat can be dissected into numerous stages, each important and each relying on the other for success, but what surprises many people is the one element of the swing which is most important to producing home runs, which is Bat Speed.

Yes, that’s correct, bat speed, and if you stop and think about it, it makes perfect sense. The faster the head of the bat is traveling when it makes contact with the baseball, the harder the batter will hit it.

Now before you begin arguing the issues of leg strength, hip explosion, quick wrists and a 100 other elements which affect power hitting, let me say I agree with you. All these things and a hundred more contribute, but what do all these other things have in common, they all contribute to increasing bat speed.

All things equal, can a 160 pound hitter hit the ball the same distance of a 240 pound hitter? Logic and mathematics say no, however although the heavier stronger player may hit the ball 480 feet, and the smaller player 420 feet, aren’t they most likely both home runs. 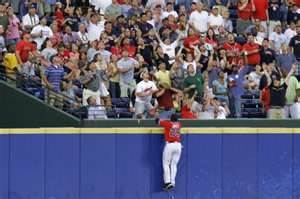 No Catching This One

Let’s learn some techniques for increasing our bat speed, especially in the off season when the pressures of actual play do not enter the equation, although year round training is advisable.

No different than any other skill in baseball, repetitive practice is the best method of improvement, therefore physically practicing your swing is by far the optimum way to increase your bat speed.

(1.) Whether it’s peer pressure, not wanting to embarrass one self or just the environment of practicing with others, many athletes encounter problems training with intensity when practicing by yourself. Great athletes over come this issue and train intensely regardless of the environment or situation, and I’m not saying you don’t. I’m saying beware of the issue and don’t allow it to affect your training. 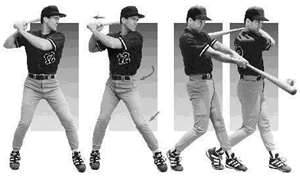 (2.) Now that we have the proper mindset, we need the proper equipment, which using our game bat being the first requirement. Some coaches suggest swinging a heavier bat as a way to increase bat speed, as obviously when you return to your normal bat it will seem much lighter, thusly the quicker you can swing it.

I don’t agree with this method for a number of reasons such as,

(A.) Muscle memory, which is extremely important in sports, is just that .. Memory. If your body’s muscles remember to exert X amount of energy to pull the heavier bat through the hitting zone, it will exert the same amount of energy when swinging the lighter bat, which will Negatively affect your timing.

You say what about swinging a weighted bat in the batters circle. That’s totally different as you are not creating muscle memory, but only a temporary feeling of extra strength and quickness, which is beneficial for that one time at bat. Otherwise you’d never have to swing a weighed bat while on deck again, because your body would remember that temporary feeling.

(B.) I’m a firm believer in identical repetition, such as always standing in the exact spot in the batters box every time you hit. Your sight, timing, and a 100 other elements of your batting system is dependent on everything being identical at all times.

If you move up or back, in or out in the batter’s box each time beginning at a different point, you’ll never be a consistent hitter because your body is constantly trying to deal with different variables every time it bats.

(3.) Use some sort of devise to hit and swing through, such as a ball off a tee or a baseball hanging from a rope or something similar. 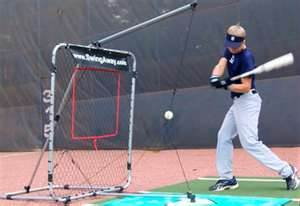 Image a boxer’s workout. He’ll only practice short jabs into the air, while moving his body in a defensive mode, because he’s not fully extending his arms in a punch, but he’ll always strike an object, body bag for instance, when exerting full power in order to prevent injury and to simulate the feeling of hitting his opponent.

In order to increase bat speed you must swing as if it was real and you’re trying to hit a pitched ball, which means eye to bat coordination and follow through. To only practice the swing without the accompanying elements can work, but only in possibly 1% of the cases as 99% will fail, as it’s just the nature of the beast.

(4.) Maintain a schedule of recorded swings and a routine. Some professional baseball players will actually practice their swing 400 - 500 times every day, which indicates how important this drill is, remembering these are MLB players. 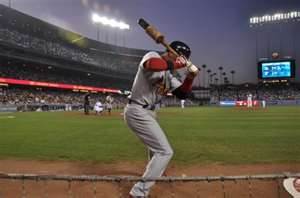 To consider that type of regiment would, in my opinion be foolish, as there are such things as school, homework, church and other things in life to do other than swing a baseball bat 2 hours a day.

However, it is not unreasonable to set up and more or less maintain a realistic routine.

You can break your routine down into days or however you wish, just use common sense. Remember 100 Proper Swings is better than 1000 Bad Swings.

Never try completing a routine if you become too tired.

If your goal is 50 swings a day, and you’ve had no problem achieving that number, but today it seems a real drudge trying to get past 25 swings, Stop. Some days are just like that and are nothing to be concerned about, and I know you’ve heard it before, but it’s not the Quantity it’s the Quality of swings which matter.

A tired batter often results in:

a. squeezes the bat handle too hard, which slows down bat speed …

b. drops their shoulder, which produces an upper cut swing …

c. creates a lazy bat through the hitting zone.

To be a quality baseball player you do not have to hit home runs, but you do have to hit the ball hard, and increasing bat speed will go a long way in helping you achieve that goal.

How to Hit a Baseball