There’s never too many baseball hitting tricks and drills for a coach to know and utilize to teach the skill of hitting. Some drills, at first glance may seem identical to  another, but there is always, or should be, a slightly different twist involved which may help a hitter better understand the drill and its intent.

It’s important coaches keep this in mind as I take you through various baseball hitting drills, that although the particular drills may address the same skill or issue, none of the drills are identical. I only stress this because as a coach, trying to understand the drill mechanics and intent, of the 100th drill you’re reading, they may all seem to blend together. 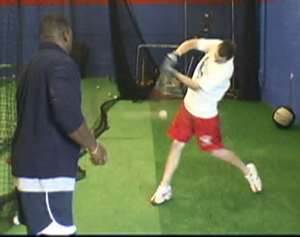 There is no one key element to hitting, as all the components must work in unison on a consistent basis in order to be successful. However, I tend to lean toward developing unobstructed focus on the ball and lighting quick reflexes as skills which at times can overcome mistakes.

For instance, a hitter expecting a fastball may have begun to transfer his weight forward too soon, but if he’s able to identify the seam rotation and quickly modify the swing, he still may be able to make solid contact with the ball. 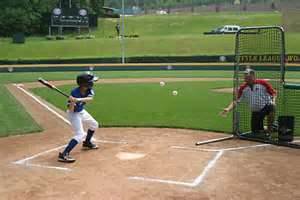 (1.) The pitcher, who should be the coach because the drill requires holding 2 balls in one hand, positions a pitching protective net @ half way between the mound and the plate where he’ll pitch from behind.

(2.) He then soft tosses 2 baseballs at the same time to the hitter.

(3.) The balls will, by nature, travel in different directions and levels as they approach the batter.

(4.) Preferably, another coach yells “high” or “low” indicating which ball he wants the batter to hit.

(5.) The batter must instantly gain focus and decide which ball he was directed to hit, and execute.

(6.) The coach should mix up the directions and can add “inside” and “outside” as part of the drill. Be careful not to make it too complex, “low ball to right field“, as that will destroy the intent of the drill.

Drill Two- Hitting to the Opposite Field:

In order to become a productive hitter, hitting for high average and being a RBI machine, a player must utilize the entire field, hitting to all parts of the ball park. You’ve heard the saying “Hit the ball where it’s pitched” which essentially means if the pitch is located on the outside of the plate, don’t try to pull it, hit it to the opposite field. 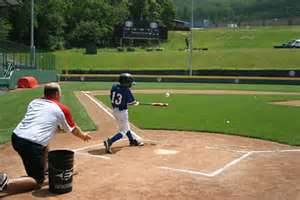 (1.) Begin by standing behind home plate while the batter is in the box and looking backwards at you.

(3.) Move your location to the batter’s left and right which has the ball approaching from different directions and angles and helps develop the opposite field swing. 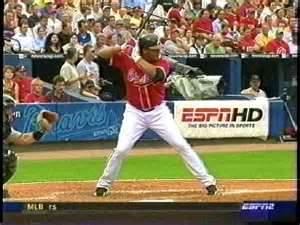 There are certain hitting fundamentals which are imperative to hitting the baseball with authority, so let’s exam a selected 3 in detail.

(1.) Balance… maintaining balance is crucial to body control, not only for hitting, but for every aspect of baseball. Balance begins at the base, which is dependent on our feet and legs when in our batting stance.

However, the classic feet spread a little wider than shoulder width, which is a great place to start, is not a rule written in concrete. How far to spread your feet or whether to use an open or closed batting stance, is strictly a batter’s decision as to what works for him.

Weight distribution is the real key to balance, and this includes while being in the stance, moving backwards or moving forward, keeping the weight directly over the hips maintains balance.

(2.) Hand Movement … Where a player’s hands begin is again, a personal decision. Players hold their hands low, back, up and what’s right is  whatever feels comfortable and works for them.

However, what is identical to all players is the hands move backwards, usually as the pitcher breaks his hands or begins his wind-up, pauses, then explodes forward bringing the bat through the hitting zone. 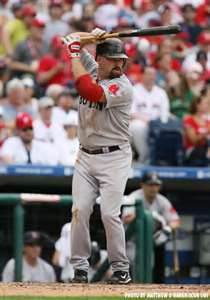 (3.) Head … A player’s head must stay still as they swing or risk the chance of taking their eyes off the baseball, which changes making ball contact to a matter of luck instead of skill.

You’ll hear the phrase of “Keeping the Head Behind the Ball” which essentially means the head is kept stationary and still, while the body moves in order to hit the ball out in front of the head.

(1.) Balance … Maintain weight over the hips

(3.) Head … The head must remain still in order to retain eye focus on the ball.