There are hundreds of examples of a Baseball Fielding Drill, we're going to look at a few and walk through the drill and each player's responsibility.

Runner on first and a sacrifice bunt is expected.

(1) The pitcher is instrumental in this situation and should be included in the drill. He should be required to throw over to 1st base, both as a pick-off attempt and as a "I see you" move.

It's imperative the pitcher practice his slide step towards home allowing the first baseman to become familiar with it, as he must react to the pitcher going home.

For the most part, especially in higher level baseball, bases are stolen off the pitcher, and to a lesser extent the same holds true for sacrifice bunts. The pitcher Must hold the runner close.

(2) The First Baseman's initial and most important responsibility, is to hold the runner as close to first as possible to restrict his leadoff. The obvious reason for this is... the closer you hold the runner to first ... the farther he must run to second base, which hopefully affords the time for the defense to get a force out at second.

As soon as the pitcher goes into his pitching motion the first baseman immediately must charge home plate in order to field the bunted ball as quickly as possible. His Sole mindset, at this particular moment, should be to field the ball and quickly throw to second base in order to get the lead runner out by a force play.

There can be No hesitation on the player's part to think as it requires too much time, voiding the chance for a force out.

(3) The catcher, the General, has the entire field, the ball, defensive players, runner and batter, in his full view and must make the determation if the lead runner can be thrown out or not.

This identical drill can be individually run using the third baseman to field the bunt, or included with the first baseman.

In youth baseball and ill coached older teams, you’ll usually see the first baseman become a gawking spectator watching the ball as it goes toward the outfield. This is of course is wrong.

Should the right fielder lose the flight of the baseball in the sun or lights, he will look to his first baseman to see where he is pointing. This at least gives the outfielder a chance to re-locate the ball and catch it, or retrieve it quickly to keep the hit to a single.

Runners on base and the batter hits a ball into the outfield gap. The baseball diamond instantly becomes a chaotic merry go round with defensive players running to their positions and base runners streaking around the base paths.

Should the ball be hit to right center field over, he should position himself near the right side of the pitching rubber. Imagine a straight line extending between the pitching rubber and first base. He should be on this line @ half way in between.

Should the ball be hit to left center field over he positions himself on the left side of the pitching rubber. 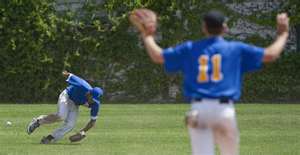 The Cutoff or Relay Man Must be Loud and Visible for the Fielder to Quickly Locate Him.

As the relay player catches the throw from the outfielder and turns to throw the baseball home, the first baseman is to line himself up between the relay man and home plate.

He should raise his arms as if he were a football goal post, giving the relay player an instant, on line target to throw the ball at.

Should the throw be off line, cut it off immediately. If the throw is accurate, and the first baseman knows there’s a play at the plate because he’s been constantly glancing at the runners, let the ball come through to the plate.

By the way, if the throw is going to come through to the plate, teach the first baseman to move out of the way, either left or right. You don’t want him blocking the catcher’s view of the ball.

If the catcher yells  “Cut”, then catch the ball while being prepared to throw to second base, or third base if the runner(s) tries to advance.

Ball hit to left field and the batter is trying to stretch it into a double.

As soon as the batter rounds first base and heads to second the first baseman should trail after him, slanting towards the outfield and keeping an eye on the direction the throw in will come.

He should be in line with the throw @ 15’ - 25’ behind the play in order to back up any bad throw from the outfielder or if the second baseman flat misses the ball.

By being able to keep the ball from skirting around the field, you’ve kept the hit to a double instead of a triple or possibly a runner scoring.

Remember: There's no crying in baseball and no spectators on the field.