Many Baseball Drills For Older Kids are much more complex and skill oriented than those for younger and less experienced players. Advanced drills not only require perfect execution of the play, but usually involves 2 or more players in a predetermined and recognized situation, which requires quick acknowledgement of deceptive signals and timing situations.

One such drill is a pick off situation at Second Base, known as the Daylight Drill.

This drill, or pick off play, involves the pitcher, catcher, shortstop and/or second baseman. The intent of the play is to deceive and pick off a base runner who is taking too large of a leadoff from second base, with the intent of either stealing third base or shortening his distance to home plate in order to score on a shallow base hit. 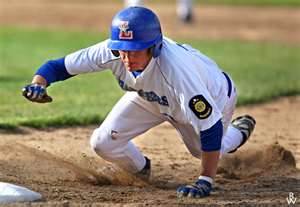 Due to the complexities and timing of this play, if your players, the middle infielders, are not accustomed to looking in at the catcher’s signals, do not introduce this drill because the catcher is responsible for calling the play.

Should everybody Not be on the same page, the play will end with disastrous result.

The catcher is responsible for seeing past the pitcher, as he gives his pitch signals, at the runner on second base. The key element, red flag, for the catcher is if he sees daylight between the base runner and the shortstop.

Let’s explain this. If the shortstop is playing his normal position, no shift or attempt to keep the runner close to the base, and the catcher sees the runner’s leadoff is large enough to create daylight between him and the shortstop, towards 3rd base, the lead is too large.

The catcher, most likely on the next pitch, will evaluate the runner’s lead off and if he creates daylight again, the catcher will signal the pick off play. This is why it’s imperative the middle infielders must be accustomed to looking for the signaled pitch.

The Catcher signals the play;

The pitcher acknowledges the play has been called, a tip of hat, nod of the head, etc. It’s imperative the pitcher does not pay any attention to the base runner, re-enforcing the runner’s confidence to edge farther off the base;

. On a 3 count, or whatever determined time span, the pitcher wields around and throws directly to the second base bag. There can be NO hesitation, so the middle infielder had better be there, and the throw must be low because the runner will be diving back to the base;

The shortstop will be the primary middle infielder to cover second base for the throw because he’s behind the runner and out of the runner’s line of sight. The second baseman, although in the peripheral vision of the runner, is not totally excluded from covering the base. For instance if the second baseman has been juking runners all day, the movement will not create an instant response from the runner.

As the defense be careful to not out-slick yourself. There is a distinct possibly the runner’s intention was to steal 3rd base on the next pitch, therefore the pitcher’s initial movements will provoke the runner to take off for 3rd base, not retreat to 2nd.

As the defense be careful to not out-slick yourself. There is a distinct possibly the runner’s intention was to steal 3rd base on the next pitch, therefore the pitcher’s initial movements will provoke the runner to take off for 3rd base, not retreat to 2nd.

Pick Off at Second

Much like turning a double play, the shortstop must be prepared to quickly throw a chest high strike to the third baseman for the put out. Should a Run Down occur, players should resort to their normal run down assignments.

This is not an easy play to execute and must be practiced extensively in order to work smoothly, and as the coach you may not consider the practice time required worth the effort to learn a play which may be called once or twice a season.

However, consider this: Like the person stranded in the desert without water, who would gladly pay a $1000 for that $1.99 plastic bottle of water … a pick off play which saves a championship may end up being priceless.