I teach a lot of Baseball Catchers Drills because the catching position quite possibly has the most influence on the game than any other player on the team. Sure, a dominating pitcher controls the game and a home run hitter can change the game with one swing of the bat, but … the pitcher pitches every fourth or fifth day and the home run hitter normally bats 4 times a game.

However, the catcher is involved in every pitch, every defensive play, every coaches signal … Every Game.The word Every lends significant proof of the thought process of the catcher being the most important player on the field.

Assuming we all agree on this hypothesis, and even if we don’t, let’s look at several tips which will make you a better catcher and a positive influence on your teammates. 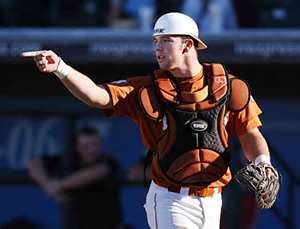 Being The Infield General

However, a good, or great catcher takes communication on the playing field to the next level by helping the team to become a much better defensive unit. He does by being a student of the game and a communicator. He anticipates events and let’s his infielders know ahead of time of what possibly could occur.

For instance:
1. If you encounter a bunt situation or have knowledge a particular batter likes to bunt, tell your fielders. “Heads up for a bunt !” “Possible bunt!”

2. Left handed batter coming to the plate … point to the pitcher "Cover First!”

3. Runner on First … point to the middle infielders “Who’s Covering?”

4. Runner on Second Base … “Keep the Ball in the Infield!

These few simple directions give your fielders the chance to pre-program what they’ll do with the ball, which eliminates that split second indecision which allows the ball to skirt through the infield by an inch. This greatly improves your team’s defensive skills.

It doesn’t matter if you’re calling a perfect game, if your pitcher has problems seeing the signs it can only end up being a problem.

So how do you help your pitcher see the signs? The obvious answers are hold your signals higher or open your stance allowing a more open view, but this also allows your opponent a better chance to see your signs, which you don’t want.

An easy method is to always carry a bottle of White Out with your gear. Paint the back of your fingers with the white out, which is easily seen even in the shadows between your knee and mitt. The white out will not come off as easily as wrapping tape around your finger tips and won’t interfere with your grip.

A last ditch answer is to moisten your fingers and rub them in the chalk used to line the field. You’ll have to repeat this often, but it’s better than nothing. 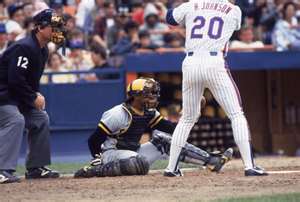 Catchers are taught basic fundamental squatting stances which must be used in most situations, but in Non-Blocking Situations such as less than 2 strikes, less than 3 balls or nobody on base varying your stances could have a positive effect on your pitcher and infielders.

Here’s a few examples of what varying your stance can accomplish:

1. It gives your pitcher a different looking target, which if he’s having control problems, could help him settle into a groove.

2. Varying your stance gives you energy and maintains your concentration. Squatting, catching the ball, throwing the ball back, can get pretty boring after awhile and even if you don’t realize it, it’ll slow your game down.

3. Bringing showmanship, creatively and energy to your position will set you apart from 99% of the other catchers, which will help you get noticed.

*** Don’t get caught up in the moment. Remember, you only vary stances in Non-Blocking & Non-Throwing situations.

Blocking pitches in the dirt is a major component of being a great catcher. The goal of not allowing pitches to go to the backstop or allowing runners to advance, is a two prong task.

1. Stopping the ball from getting passed you …

2. Keeping the Blocked Ball close enough to you that it keeps runners from trying to advance. 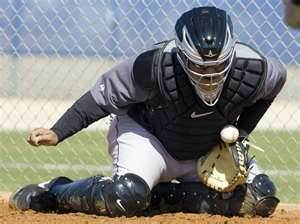 Let’s look closely on limiting the Ricochet, because if the ball bounces too far out in front of you, runners can still advance although you stopped a wild pitch.

Firstly, the catcher’s body must be Square to the ball, where the pitch and anticipated bounce will occur dictates the movements of the catcher. If the ball bounces in front of him, he immediately drops to his knees mitt on the ground and leans forward.--- Baseball Catchers Drills

If the bounce is to either side, he must leap frog to the anticipated spot and perform his blocking technique. He must get square to the bounce of the ball.

Secondly, the catcher must have stopped moving before the ball hits him, otherwise you have a situation of two moving objects colliding. The moving catcher and the moving ball, which will create more energy making the ball ricochet farther away from the catcher.--- Baseball Catchers Drills

The catcher must be quick enough to get in front of the ball and be waiting for it to hit him.

To really impress the scouts, as the ball bounces into you, Exhale, reducing the body’s hardness, it’s like the ball hitting a wall vs. a pillow.