When teaching Baseball Base Running, it’s important to stress to your players that speed is not the only requirement needed in order to become a good base runner. It’s all too common for the team’s slower runners to day dream during these coaching sessions, because they figure they don’t apply to them, and that’s a huge mistake.

There’s no sense trying to reinvent the wheel, therefore let’s exam the mechanics of the professional runners, track & field sprinters.

Disregarding the starting block aids, have you ever watched a track sprinter run a 100 yard dash race, noticing the mechanics of how a sprinter begins their run with their body bent over in a very low position.

The science behind this running method is actually quite simple… the runner keeps his body low, keeping wind resistance at a minimum, and with each additional step slowly raises his body, until by the fourth or fifth step he is standing upright and running at full speed.

Briefly, we have already discussed the first step a runner takes when attempting to steal, is a cross over step, while pivoting on the right foot, cross the left leg over right, which turns the body to the target and explode straight towards the base. Now let’s learn how to increase our initial speed from the Cross-Over Step.

(1.) Have the players take their base stealing position at first base, legs bent, head up, on the balls of their feet.

(2.) Have a coach stand @ 3-4 feet to the right and slightly behind the runner, with his arm extended straight out at shoulder level. I suggest using a broom handle, whiffle ball bat or something similar to relieve the stress on the coach’s shoulder as holding an object straight out is difficult. 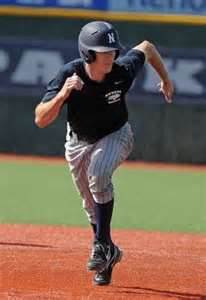 Baseball Base Running - Always Use Cross Over Step

(3.) The runner when told to “go!” performs his cross over step and explodes toward second base, he should not be erect enough to touch the coach’s arm as he passes under it. If he does, the runner is standing up too soon which creates wind resistance and slows him down.

Repeat the drill until the player(s) consistently does not make contact with the arm or whatever other object used. By perfecting his stealing mechanics of proper footwork and beginning low the player increases his chances of performing a successful and safe steal.

Baseball Base Running Drill - Running Through First Base

You’ll learn as a coach, if you haven’t already, that you really become attached to your players and will endure the pain of failure as well as the joy of their successes. What will really crush you is when something you, as a coach, failed at and it hurt the player, especially a talent challenged player. 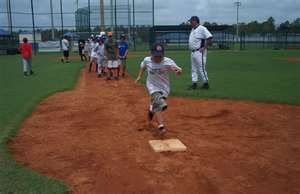 Teach Running Through First Base

It was half way through the season and one of my players had yet to reach first base, when he hit a ground ball deep towards the shortstop hole. I was overjoyed as it appeared he’d have his first base hit, I cringed and nearly dropped to my knees as I saw him slow down as he approached first base allowing the throw to beat him.

From that time on, no matter how simplistic or juvenile it may appear, we developed a running drill and drilled on running through first base every Spring.

(1.) Instruct your players on how to properly run to first base.

(a.)  Explain to them they should run either on the baseline or on the foul side of the baseline as they run to first base. Amateur baseball fields rarely have the runner’s lane marked, but most do chalk the foul line, and the players must know if they run too far into fair territory and are struck by the throw, say from the catcher fielding a swinging bunt, they can be called out. 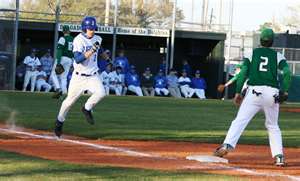 (2.) Instruct your players to attempt to step on the base in the middle or right side of it, although they have a right to the entire base,  younger inexperienced first basemen will sometimes stand on the inside portion of the base. We’re here for the kids so if the runner can avoid stepping on the fielder’s foot or ankle, it’ll prevent an injury to one or both players.

(3.) Coach them to run hard past, I used the term “through” first base, never slowing down till they’re well past it. As an added pre-caution, I instructed my players to always turn to their right and come back to the base.

I know the “turn right rule” is rarely enforced, but you have to turn one way or the other to return to first base, so turn right in order to avoid an argument with a 12 year old umpire who calls your player out because he turned to the left despite not making any motion to indicate he was trying to advance to second.

(4.) Have all your players line up at home plate, each one individually assuming his batting stance at the plate and pretending to hit the ball. Have them run as hard as they can to and through first base, turn right and return. Go through the line several times and be quite serious about the drill, challenging them to increase their speed each attempt.

This drill may sound simplistic, but developing a good “work ethic” of running hard through first base, no matter if it appears to be an easy out, will result in a few hits being beat out by lazy throws from infielders.

Baseball Base Running to Running the Bases